Marjana Krajač
JOURNAL is a process diary, monthly digest of choreographic work as well as containing reflections, dialogs, notes and contemplations. It subscribes itself to diverse formats and forms, changing as it goes along, and shaping itself out of the requirements of the moment at hand.
Tensity of Unresolved Questions

We were closing the rehearsal week for a new work of Fantaisie Chorégraphique Series with an outdoor session held by a young architect Nemanja Čađo as a preparation for the project that is going to take place this fall at the Norwegian Theatre Academy at Østfold University in Fredrikstad (Norway). The location of the rehearsal was the architectural environment of The Cube Building in Zagreb, finished in 1968 by an iconic architect Ivan Vitić. In contrast to its outer minimalism, the inside of the building is largely filled with art interventions by many relevant artists of that time, with most impressive contributions being by the sculptor Raul Goldoni and painter Edo Murtić. As an example of an architectonic modernism of the ‘60s it opened the topic of the meeting point of the body and the surface, be it in the material or historic sense. We spent a good part of that outdoor day in movement, exploring and reflecting. Photographer Tjaša Kalkan documented the day and her diary can be viewed here. 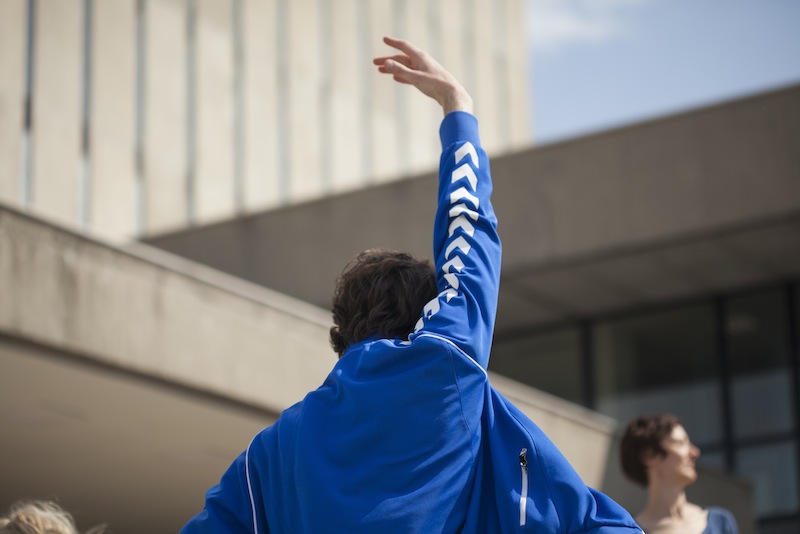 On that last Friday of April 2018, we were sitting in-between dance sessions, wrapping up the week and commenting on some of the procedures that we were using in choreographic process. We encountered that immensely interesting moment that is between directions and exploration or clearance and blurriness, asking i.e. What is that navigated contingency that drives a choreographic process? If a process is truly processual, meaning, it does aim to explore and seek, holding a space for the indistinct areas that are yet to be sensed fully.

By taking ourselves outside of the dance studio we were able to explore a gripping nature of surfaces, volumes and textures that are constructing a space in which movement is taking place. But also other sensory phenomena where suddenly intensely present; temperature, wind, sunlight, greenery scents, traffic sounds, people passing by and their gazes falling upon the dance that dances itself.

Now, returned to the known atmospheric proposition of a dance studio, there was a feeling, somebody said, as if we have arrived back from a journey of a sorts. Structures that encountered The Outside expanded the notion of what is there in the dance, still possible and available, hence bringing now new sensorium and knowledge thereof to the familiar territory of the dance studio situation. Contingency of choreography, its possibility to contain all available experiences, expanding itself more or less in to the endlessness, introduces an awareness of the full scope of containment that is dance. A dance that then resides primarily within the vastness of the unknown. That unknown is able hold its clarity, to hold its defined scope, and yet it has a potential to depart from the known in to the infinite possibilities of the navigated contingency.

By committedly suspending that arrival, by allowing a delay in certainty, a dance is able to travel through the experience of the self, revealing more layers of depth and tension. That very unknown, questions still unanswered, surfaces contained yet still in expansion, is what allows certain choreographic immersion. That immersive texture is not just for the maker but also, even more, for the viewer, as he will collide and digest other kind of performative experience. By being inside of the unknown, immersion conjoins all sides simultaneously; the dancer and the danced, the viewer and the viewed, in ever-stretching possibility, a tensity of the questions posed.

We were closing the rehearsal week for a new work of Fantaisie Chorégraphique Series with an outdoor session at The Cube Building in Zagreb,constructed in 1968 by an iconic architect Ivan Vitić. Written by: Marjana Krajač