Marjana Krajač
JOURNAL is a process diary, monthly digest of choreographic work as well as containing reflections, dialogs, notes and contemplations. It subscribes itself to diverse formats and forms, changing as it goes along, and shaping itself out of the requirements of the moment at hand.
Choreo-Scenographies and Heterotopias of Time 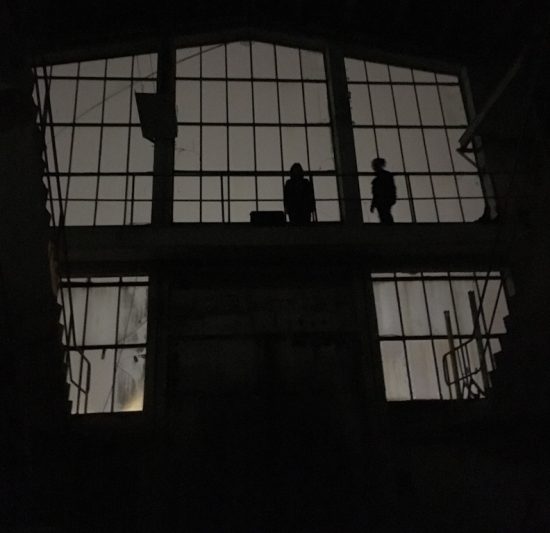 At the beginning of December 2018, a project that I was mentoring for the Norwegian Theatre Academy at the Østfold University in Fredrikstad, had its final presentation at three site-specific locations, including the old shipyard building in Fredrikstad. Titled Corporeality of Scenography: Within the Zone of the Third Space, the project was an MA graduation work at the Department of Scenography by the young architect Nemanja Čađo, performed by Karoline Clasen Holland, Kaja Mærk Egeberg, Tobias Shaw Petersen, Lærke Grøntved, Mari Pitkänen, Eva Jaunzemis and Ingvild Isaksen. Performative proposition of this structured choreo-scenographic environment examined a relationship between scenography and choreography, by articulating several spatial strategies of the subjective space and subsequent transformed histories.

As the project reached its final destination, few prisms of its propositions became more visible. The most important being for sure the one that articulates a relation of the performative gesture and it’s surrounding objectual systems. To give it a bit of context, let me note that some perspectives and investigations of the object-related choreography are reaching as far as some works of Yvonne Rainer (Parts of Some Sextets, 1965), but also Simone Forti (Slant Board, 1961), or even further back, i.e. collaborations of Pablo Picasso with Léonide Massine (Parade, 1917). William Forsythe also dabbled in some aspects of it, i.e. in his installation Scattered Crowd (2002). And that is to mention only a well known few. In all of these works, choreography is inscribed as a prerequisite of the broader exploration of spatial symptoms, meaning, almost every choreographic gesture already encompasses a potential of the objects to be related to the elements of the overall choreographic score. So the object appears twofold: as an organic object and as a part of the overall score. Going further, space itself is then also an element of the score – and – a score in itself, creating the triple layered structure of animate and inanimate elements, understood here as solely animate, in each aspect.

In that regard, the workshop titled Questions within the Third Space that I was holding in September 2018 at the Academy as part of the mentorship, was somewhat a crucial step of condensation, for logistical aspects of the project to come together, but also to gather motifs, fragments and questions that the project might open in depth. Focus of this workshop was to articulate a series of meta-propositional questions that are thematically addressing the project’s idea of the Third Space and its derivates, employing movement and structural research. Along the lines of the Third Space explorations, propositional questions were tasks for the investigation of different movement responses, as well as being a structural map for understanding of the thematic field in general. The subsequent research mobilized both performative capacities as well as structural ones, allowing and enhancing possibilities of inter-exchangeable layers of movement, architecture and scenography. Each day constituted a chapter on its own, accumulating singular dances, expanding the topic at hand. Moreover, each research-day took place in a different space (inner or outer), intensifying some of the propositional questions of the spatial choreo-scenographies and its repercussions. Workshop participants were invited performers, alumni of the Performance Department as well as students of the Scenography Department extending the scope of their own research.

Mentioned workshop constructed also a continuation of the previous project phase, that took place in April 2018 at the Zagreb Dance Center. This phase served both as a hub for embarking on concrete project discussions but also as a construction of the relevant vocabulary around issues concerning choreography and its performative and conceptual symptoms. Nemanja’s concept of the several zones of the Third Space was hosted within the rehearsals for the running project of the Fantaisie Chorégraphique Series that begun in March and that was in April continuing towards its premiere, performed by five dancers. The concept of the Third Space offered here an interesting layer to this particular dynamic, embracing some of the practices from the fields of scenography & architecture, calibrating them further by addressing few choreographic sensibilities that arose from the moment. Besides working in a dance studio, we decided to hold one session in an outside space, so we went to the location of The Cube Building created by architect Ivan Vitić in 1968, that originally hosted the Central Committee of the League of Communists of Croatia, and that currently serves as the Ministry of Maritime, Transport and Infrastructure. In contrast to its outer minimalism, the inside of the building is filled with art interventions by relevant artists of that time, the most impressive contributions being the ones from sculptor Raul Goldoni hosting his works in glass and expressionist painter Edo Murtić. As an example of architectonic modernism of the ‘60s, the building introduced topics relating to its inner historic space through a sensorium of perceptions, that could be understood as a meeting point of the body and the surface, either materially or historically.

As the shipyard building of the Fredrikstad Mekaniske Verksted was the location of the project in its final form, the meticulous journey through diverse locations, contexts and themes was not only theme appropriate but also necessary. Fredrikstad Mechanical Workshop Shipyard was established in 1870, and delivered its first steamship in 1873. In the period from 1873 to 1987, 443 ships were built here and at most, 2500 men and women worked there. In 1988, the shipyard was closed. Spatial choreo-scenographies that the project was exploring, required through its subsequent development, a certain broader frame of conceptual, architectural but also historical implication of the mentioned spaces, on micro and macro level, concerning occurrences and time. In that overall arc of the project, that opened diverse questions, what remains stabile is not a singular conclusion or a final performative effect but an array of platforms that the project was coordinating on the level of exposition but also on the level of meaning. It proposed in numerous instances an inter-medial understanding as continuous negotiation between different levels and layers of perceptual relevancy, understanding them as a temporary built phenomena that are congregating around the topics of choreographic, architectural and objectual gesture, destabilizing their usual materiality.

In his essay Comrades of Time, Boris Groys relateably concludes:
The present has ceased to be a point of transition from the past to the future, becoming instead a site of the permanent rewriting of both past and future—of constant proliferations of historical narratives beyond any individual grasp or control. The only thing that we can be certain about in our present is that these historical narratives will proliferate tomorrow as they are proliferating now—and that we will react to them with the same sense of disbelief. Today, we are stuck in the present as it reproduces itself without leading to any future. We simply lose our time, without being able to invest it securely, to accumulate it, whether utopically or heterotopically. The loss of the infinite historical perspective generates the phenomenon of unproductive, wasted time. However, one can also interpret this wasted time more positively, as excessive time—as time that attests to our life as pure being-in-time, beyond its use within the framework of modern economic and political projects.

Diary of the project that I was mentoring this year at the Norwegian Theatre Academy at the Østfold University in Norway, that had its final presentation at the beginning of December 2018. A research at the crossroads of choreography, architecture and scenography, exploring an array of different aspects. Written by: Marjana Krajač