Marjana Krajač
JOURNAL is a process diary, monthly digest of choreographic work as well as containing reflections, dialogs, notes and contemplations. It subscribes itself to diverse formats and forms, changing as it goes along, and shaping itself out of the requirements of the moment at hand.
Camera Left Alone in a Dance Studio

This is a February contemplation about the dance studio and its inner imaginations. Empty spaces, spaces that are filling up with meanings by the protocols of choreographic and dance work are regularly occupying my interest; architectures of inner and outer senses, logics of inhabiting containers of space, presence and time. This text is a refocused extract of the longer one that was written after the research presentation created last summer in Zurich, where I was invited as a researcher at the Research Academy Program that took place at the Zurich University of the Arts. Presentation included layered collection of materials regarding the questions of the moving image, camera phenomenology, and the collaborative exploration of the field of documentation throughout the history. 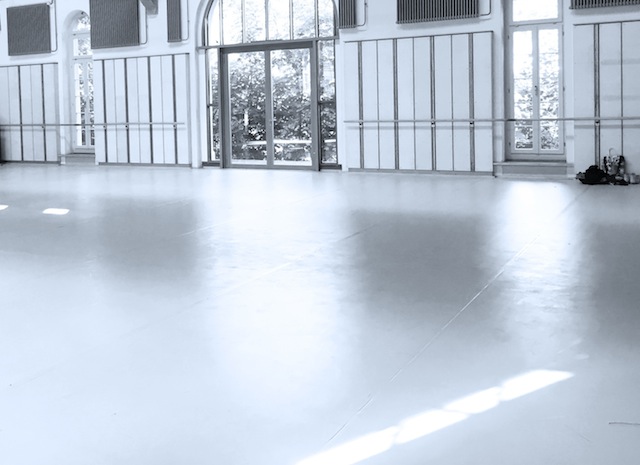 A dance studio is a specific space. In opposition to the atelier – which is usually filled with things, objects and traces – a dance studio is purposefully empty. If working in a dance studio, one is explicitly asked not to leave traces, to remove all things that you brought in and to leave the room as you found it. You are also asked to remove yourself in order for the next person or group of people to enter the place. This rhythmical exchange of things and people, of the present and the absent, is a core nature of the logic of a dance studio space. Emptiness is then a core state of the dance studio: it has to contain this inherent empty state in order to host different activities uninterfered. Potential of these diverse activities (and this diversification can be a logistical one but also an aesthetical as well as ideological one), a dance studio is a place of strong inherent potentiality, all contained in its very emptiness. Logistically, the dance studio is a predominantly empty: counting all the night hours or holidays, the emptiness of the dance studio almost precedes its occasional state of being filled with something. This empty holder is then a place of strong containment for other possibilities: containing light, containing temperature – a dance studio space is almost circulating ghostly matters:[i]

Avery Gordon wrestles with this idea, exploring how absences in narrative, history, and memory can only be reconstructed by examining the shape of the gaps they leave behind. She differentiates the ghost from haunting, defining haunting as “that which appears to not be there, a seething presence, acting on and often meddling with taken-for-granted realities, the ghost is just the sign, or empirical evidence if you like, that tells you that a haunting is taking place”[ii]

At the same time, if we observe the artistic work taking place in a dance studio, in a manner that is detached from the narrative of the content – meaning, if we approach this observation only as an activity, we could distill its rhythms as a dialog of radical presence and absence: activity that is taking place, activity that is starting or activity that is finishing.

In 1912, Anton Giulio Bragaglia declared in his Manifesto Fotodinamica Futurista:

“The picture can be invaded and pervaded by the essence of the subject. It can be obsessed by the subject to the extent that it energetically invades and obsesses the audience with its own values. It will not exist as a passive object over which an unconcerned audience can take control for its own enjoyment. It will be an active thing that imposes its own extremely free essence on the audience, though this will not be graspable with the insipid facility common to all images that are too faithful to ordinary reality.”

Bragaglia is here firmly stating that there is an interest beyond what is disclosed to us, beyond an appeared. Exactly that, phases an in-between of the appearance, or even more, the essence of the moving matter that reshapes itself as it progresses or shifts through the time-space. For Bragaglia that is the essence, meaning: the core of the value or the value itself. Making this terminology somewhat flexible, we could conclude that the essence is also in that which is not present – or seemingly not present. So the absence in its degrees of matter-in-progress could be of stronger interest for us than the moment at which a presence is peaking (which is just a peak event of the ever-folding movement in progress).

Often equipped with the wall-size mirror, the dance studio can be also understood as a place of choreological fata morgana. An empty dance studio is a strong mediator between experiences and occurrences, holding the place for containment and dissolvance, articulatingly differing from the seduction of whichever narrative of its activity-content.

Let imagine taking a video camera and leaving it in a dance studio. Camera is uninterruptedly filming; people arriving and leaving, dancing and talking, space that is filled with activity and when there is none, day and night, week after week, month after month. In an endless fluxus of available hours, a camera would organize a flow-of-hours as data, extracting and transforming the notion of the texture of time. On a bigger scale of time, within the dialectics of technical and subjective time, a camera itself entails then a potential for its own subjectiveness. Beyond the notion of the timestamp that gives us a code in time that we can orientate ourselves upon – a camera left alone, so to speak: to its own devices, would sink in to that time-dimension sans a fixed orientation point. And that inner-perspective is the very core of the subjective time.

The last question would then be: could we imagine leaving a camera running endlessly? A camera that would keep recording for hours, days, weeks, months and years: an Eternal Camera forever electronically translating everlasting containment of the dance space. A camera that is left alone, in a dance studio, until it technically dies.

This is a February contemplation about the dance studio and its inner imaginations. Empty spaces, spaces that are filling up with meanings by the protocols of choreographic and dance work are regularly occupying my interest; architectures of inner and outer senses, logics of inhabiting containers of space, presence and time. Written by: Marjana Krajač